9 Steps to a Successful Crowdfunding Campaign 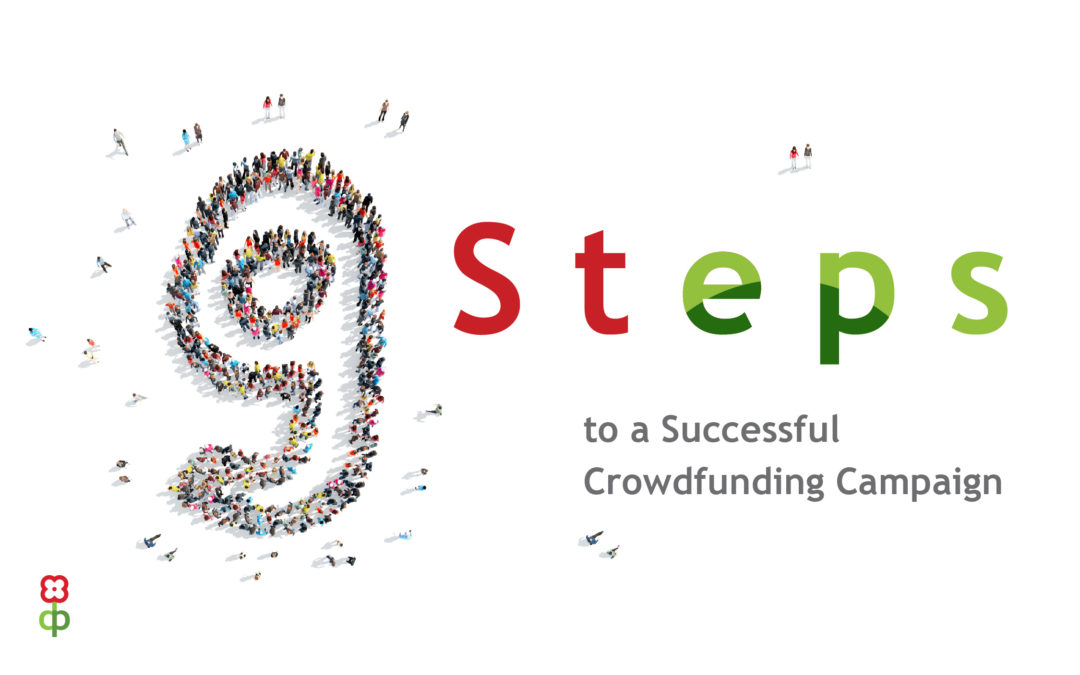 Are you considering crowdfunding to get your project off the ground? We’re here to give you the steps you need to take to successfully crowdfund your initiative.

Crowdfunding is not easy, but not impossible and the tips below will help you increase your chances for a successful campaign!

For people to support you, they need to believe in you. Be genuine, use your own words, and speak from the heart. What is your story? Why is it important? How does it affect others?

No one can speak about your story like you do. The passion that drives you to work everyday to make your project happen is what people want to see, hear, and feel.

SHOW WHAT YOU CAN OFFER

If the answer is yes, your next step is to show your crowd exactly what you’re offering in exchange for their support. If you are fundraising for a social cause, show supporters how their money will be used (e.g. $75 covers a first aid kit or $2500 covers one year of tuition). This level of transparency will give you credibility, keep supporters happy, and pave the way to growing your crowd.

Are you the right person to make this happen? Have you implemented a project like this before? Do you have a team?

When telling your story, be sure to illustrate the team. Supporters want to know who the money is going to and who is working to get the project off of the ground. Giving supporters regular updates will build a strong level of trust and solidify your credibility. Remember, it all comes down to whether or not the crowd trusts you.

One of the key components to a successful campaign is having a team. Crafting the right team gives you others to rely on, new skills on the table, and even makes the journey more fun. On top of all that, having a team also significantly increases the size of your network. The more people on your team, the more people you will have to reach out to as supporters and resources.

Focus on recruiting the right people who can make your campaign a success before launching.

PLAN, PLAN, AND THEN PLAN SOME MORE

If you’ve filled out the template, you’ve got the perfect campaign title, a catchy video, and nailed the rewards. Great job!

Except that was the easy part.

The hard part is this: finding and growing your crowd. How will you build the crowd? Who will it include? What channels will you use? These are the questions you need to ask yourself before deciding on a strategy to identify, target, and build.

No one should see your campaign at $0 (other than your mother). Aim to have raised 30% of your total before sharing your campaign on social media and making it go viral. When a stranger views your campaign, the more supporters you have, the more credible you appear.

This is where friends and family come in. These are the people who know you, your passion, and credibility so they’ll donate no matter the percentage. Once you’ve used that resource and have reached the magic number of 30%, it’s time to go public.

Why wouldn’t anyone want to support your project?!! Unfortunately, it’s easier for people to glance over your project than to take action and support it.

Remember that 80% of funds are raised in the first three and last three days of a campaign. People need to be reminded. That is why most successful campaigns are 4 weeks– this is enough time for you to mobilize and create a sense of urgency.

You’d be shocked to hear that even the people who believe in you may not come through. But That shouldn’t put you down, though. Go through your list of supporters one by one, pick up the phone, send out emails and facebook messages, and share across all platforms.

Be aware of international events that affect your target audience. When choosing when to launch your campaign, know about other campaigns and events that will take place around the same time. Be timely so that you are riding a wave, not competing for media attention. A lesson we learned the hard way.