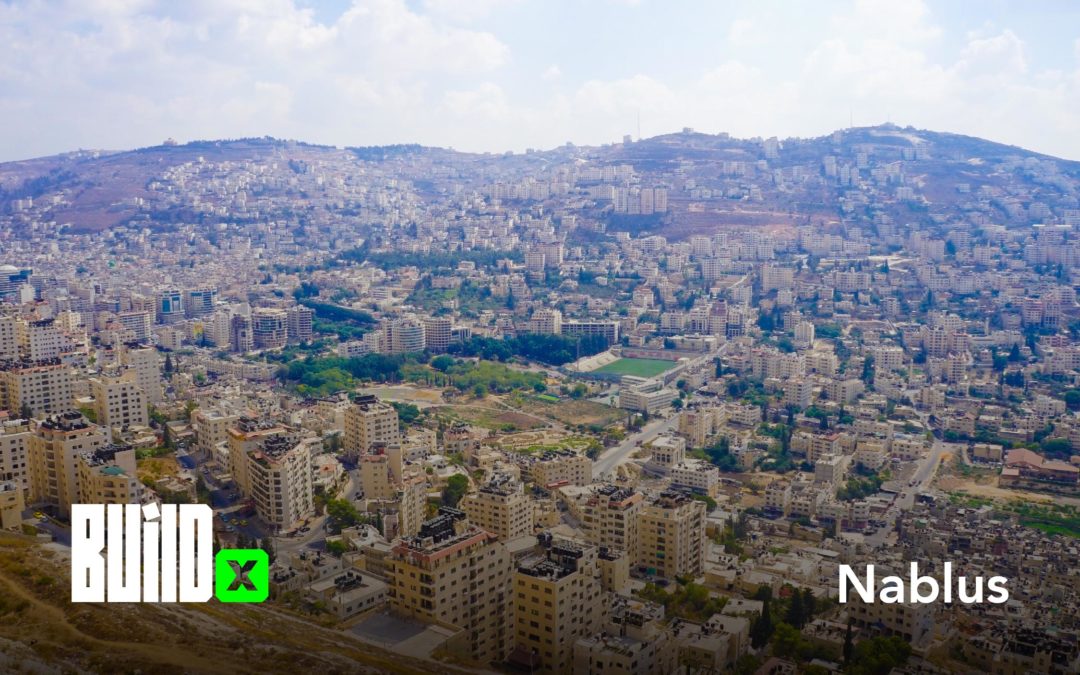 Our second BUILDx experience at a university did not disappoint. We love discovering young energy and young, enthusiastic social entrepreneurs and social leaders!

We welcomed 4 speakers, students and graduates from Al Najah University. Check out their projects and lessons learnt!

To change this, Wala’ started with a simple Facebook post on a cold Friday in January 2017 – and that’s where it all started. Wala’ ran with a group of women that day, in Nablus, and felt free. That’s where Run for Freedom was born from.

Since then, Wala’ has helped run and manage tens of activities in Nablus, and the West Bank at large. She’s worked on events that tackle several issues such as ending violence against women, breast cancer awareness, and diabetes awareness.

Wala, like most entrepreneurs, faced and faces change resistance from members of society. Wala’ went against the flow, and challenged and resisted this change resistance – as should other entrepreneurs.  Her advice to other social entrepreneurs? “Once you have the motivation, and once you take the initiative, and persist, you will succeed. The opportunities are out there, you just need to seize them”

Wala’ is currently doing her masters in Women’s and Gender Studies, and her background is business administration, accounting, and event management. Wala’s most recent achievement includes starting Marvel Activity Center, a business which will aim to support her daily activities.

Doroob – Take matters in your own hands

Tala Qawasmi is an Urban Planning graduate from Al Najah University. Right after graduating, she got involved with 6 other Doroob team members, turning herself into a social entrepreneur. Doroob is a navigation application, designed and developed by Palestinian entrepreneurs. The app aims to solve problems which pertain to our day to day lives. Palestinians, residents of the West Bank specifically, face daily challenges such as traffic, checkpoints, or even the hassle of explaining to the delivery guy where your house is. The Doroob team considered the root cause of these problems, and the result was Doroob.

Doroob has every corner you need in the West Bank, from your local mosque, to your nearest bank, to Abu Ahmad, your local supermarket. But how is the app Google Maps or Waze? The former often give us inconvenient roads, or direct us into routes we cannot use. And that’s what makes Doroob special, its precision. When you sign up for Doroob, it asks you what kind of ID you have, and based on that, tailors the best and safest routes for you. The app also offers and emergency button, which connects you to the nearest Civil Defence Department. “We don’t only attempt to make people’s lives easier, we also have a humanitarian added value.”

“Our own streets did not exist on any database.” But the Doroob team did not wait around for anyone. They took the initiative and created them themselves. “We started from zero, drew the maps of the West Bank street by street.” Tala thought it was impossible at first, especially when she was asked to map out the entire West Bank.

Tala’s left the audience with two messages, one, that nothing is impossible. And two, never to wait for anyone to do anything for you. “We have the brains, and we have the energy”

Al Ghalee Shihab, 20 years talks about his initiative, “There’s still good in us”. The initiative began in Ramadan this year, when Al Ghalee turned his Instagram profile into a public one, and sought to go to different restaurants in the Nablus area after Iftar time and taking and packaging their left-overs to later take to Etkiyet Nablus, to give to individuals and families in need. He, alongside several volunteers, had one goal – to have no leftover food in restaurants, and no starving person in the city.

His goal when he got into college was to graduate having left a mark, and not just be another number. He started volunteering in college, and felt like volunteering is where he belongs. His friends called him “The Dynamo” because of how many activities he was involved in.

AlGhalee later began to train other students on how to start their own social initiatives by sharing his experience.  One thing we can learn from AlGhalee’s experience is that if you have information or expertise in a certain field, share it with others. Imagine the social benefit if everyone did the same. AlGhalee was able to start his own business, volunteer as ambassador for other startups, and is currently president of the ASCE. How can he do it all, you may ask?

“Prioritizing is the secret” AlGhalee notes.

Paramedics Without Borders – Change begins with individuals, working together

Mohammad Abu Rajab took the stage next to talk about a social initiative that he helped found – Paramedics Without Borders. What started as 38 volunteers is now over 700 dispersed across Jerusalem, Ramallah, Tulkarm, Jenin, Nablus, Hebron, Bethlehem, Salfit, Qalqilya, etc. They aim to decrease paramedics response time to 2-4 minutes.

The groups of volunteers donate their time and money to buy paramedic kits, and to work wherever they are needed. Whether it’s near Al Aqsa, at Qalandia checkpoint, or in city centers. They respond to emergencies, and save lives. What’s a better social cause to work towards?

Currently, the volunteers also give workshops to other volunteers on first aid, as well as raising awareness about first aid to the general society. “Many people don’t know the basics to medical conditions and first aid. What they don’t know is that sometimes the simplest thing can save someone’s life.”